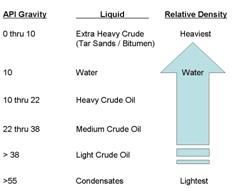 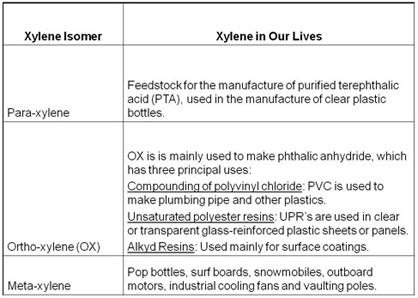 Sour Crude - Crude oil containing free sulfur, hydrogen sulfide (H2S), or other sulfur-containing compounds in amounts greater than 1% is considered sour crude (SPE definition). As is the case with sour gas, the sulfurs must be removed from the crude oil before the oil can be refined and the refiner pays less for oil that contains sulfur. Sour crude is usually processed into heavy oil such as diesel and fuel oil rather than gasoline to reduce processing costs.

Sweet Crude - Oil that contains little or no sulfur is called sweet crude.

All crudes contain both paraffinic and naphthenic components but are differentiated based on the level of those components.

Parrafinic -Crude oil containing a relatively high percentage (by volume) of linear and branched paraffins. Most conventional engine lubricating oils today are made from paraffinic crude oil. As the name suggests, paraffinic crude contains wax and generally have a higher API gravity, e.g., they are lighter crudes. Many people believe the term paraffinic to be synonymous with wax. In lubricating oils, the wax is removed in a refining process not surprisingly called de-waxing.

Napthenic (Asphaltic) Crude - Naphthenic crude contain relatively little wax. Naphthenic crude oils contain mainly (by volume) napthenes and other aromatic hydrocarbons. They generally have a lower API gravity, e.g., they are the heavier crudes. They also contain other materials including metals such as nickel, iron, vanadium, and arsenic.

API Gravity is a measure of how heavy or how light a petroleum liquid is compared to water. If its API gravity is greater than 10, it is lighter and floats on water; if less than 10, it is heavier and sinks. Most values fall between 10 and 70 API gravity degrees.​ 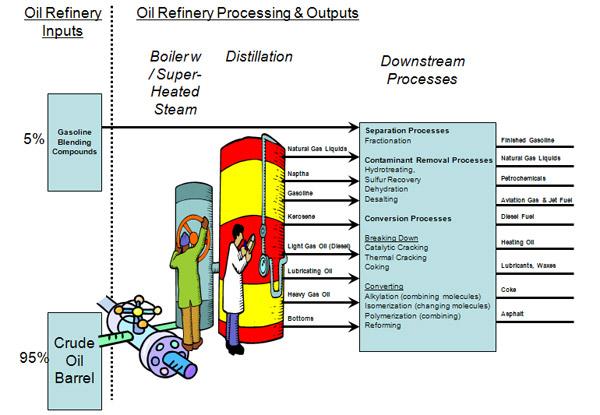 The U.S. National Bureau of Standards established the Baumé scale (degrees Baumé) as the standard for measuring specific gravity, or density of liquids less dense than water. API gravity, is a measure of how heavy or light a petroleum liquid is compared to water.

Generally speaking 40 to 45 API gravity degree oils have the greatest commercial value because they are rich in gasoline. Condensates are worth slightly less because the natural gasoline has a lower octane value. Heavier crudes are worth less because they require more refinery processing. West Texas Intermediate (WTI) is the benchmark crude oil used by the United States to set prices and compare other oils. It has 38 to 40 API gravity.​

Aromatics - Aromatic hydrocarbons are mainly produced by catalytic reforming or similar processes. Benzene and one of its derivatives, xylene are the main aromatics produced from the refining process.

​​There are five primary types of crude oil:

The two main classes of petrochemical raw materials coming out of refineries are olefins (including ethylene and propylene) and aromatics (including benzene and xylene isomers), both of which are produced in very large quantities.

Olefins - Produced mainly in the steam cracking and catalytic reforming processes. Ethylene and its derivatives are described in the natural gas basics page.

The main use of propylene is as a monomer, mostly for the production of polypropylene.

Crude oil is described as "crude" for a simple reason: It contains dozens of different hydrocarbon compounds. An oil refinery, in simplest terms does three things: 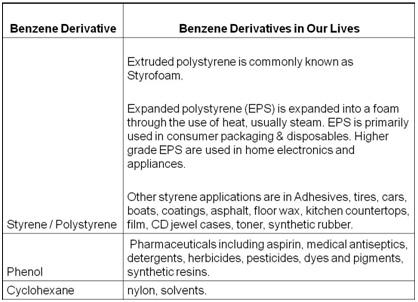 Exploration, production AND MARKETING of oil and gas 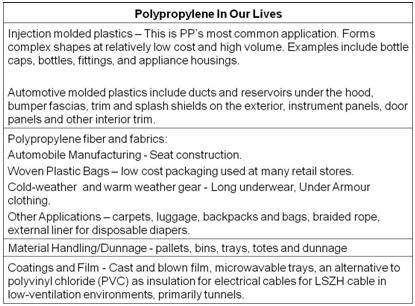